The Need for Change

Historically application server security had been provided by making use of JAAS with the use of JAAS LoginModule implementations to verify a callers principal and credential combination, in the early stages of application servers this met the requirements fairly well - however in the modern age as increasing focus is given to security we find that this simple principal / credential pairing becomes harder and harder to use effectively.

As JBoss AS7 was developed our preference was to switch to stronger authentication mechanisms, for our native communication this meant a switch to SASL based authentication bound to the connection.  Due to incompatibility with JAAS this led us to a situation where we have two different security solutions within the application server, one focussed on SASL compatibility and one focussed on the legacy approach of principal / credential validation with integration between the two.

Over the years working on security software within the application server I have come to the conclusion that whatever you do is always going to be bound by a triangle of compromises, enhance one node of the triangle and you risk reducing one or both of the other two. 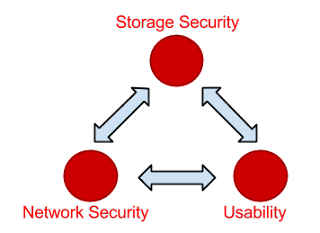 Looking at a couple of examples.

Say you address how the passwords are stored, a common approach used here is a strong one way salted hash, if the storage is compromised at worst an attacker has an irreversible representation of the password that is next to useless to them without an expensive brute force search to attempt to identity the original password.  In the context of the triangle however the authentication mechanism you use for this password will now need to have dropped to plain text transmission, this may be countered buy using TLS on the connection but within the heap of the application server a plain text copy of the password will reside for some time.

Another option may be that some form of one time password is used instead, this improves the situation for both storage security and network security as the whole point of these passwords is that even if they are intercepted they can only be used once - the compromise however now is that usability is affected.

When an application server is deployed it is the role of the administrator to review these options in the context of their own installation, as an application server vendor it is not our role to prescribe the solution to be used instead our role is to provide the capabilities and options to allow the administrator to make these decisions and that is one of the main aims of the Elytron project.

As mentioned above there are two predominant requirements of this project: -


This is not an exhaustive list but here are some of the key areas we are looking to address: -

Underlying all of this is the emphasis on making sure stronger approaches to security are made available whilst simplifying the steps needed to achieve them.

Following on from this will be a series of blog posts looking both at the APIs and SPIs of the Elytron project and how these will be represented in the application server in the form of the new subsystem currently being developed to expose this.